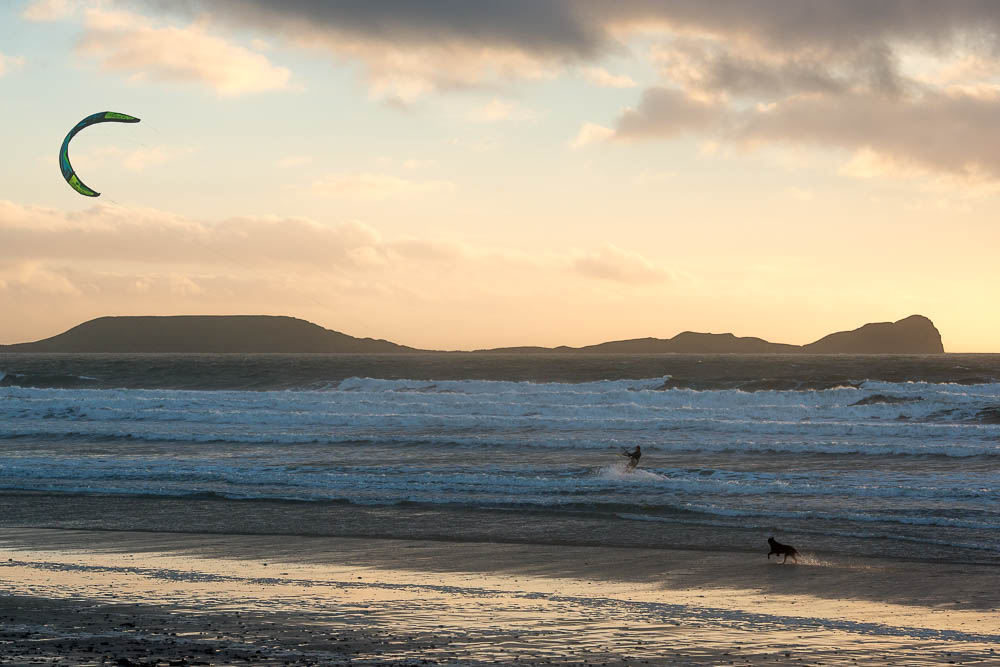 The recent?days of grey did have the odd interruption of sunlight and it was?during one of these that I was at the Llangennith?end of Rhossili Bay. The wind was really blowing in from the north keeping the surf down and a bit messy. Not the best waves, but good enough for a bit of practise. A few kite boarders were present going up and down the shoreline. Unfortunately two finished just as I arrived, but another arrived with his dog and set off, luckily just as the light started to get interesting. 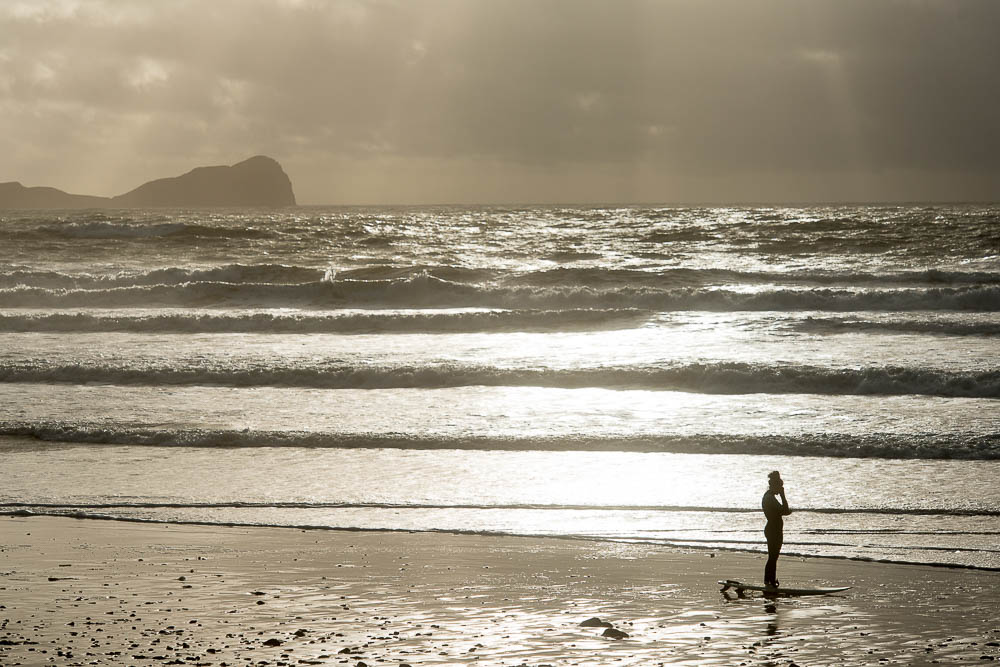 The lighting changed from bright, light cloud to intense, bright backlighting to the final blues and yellows of sunset all in an hour or two. It would have been easy to leave at the start with the bland cloud, but it always pays to stay and see what happens. 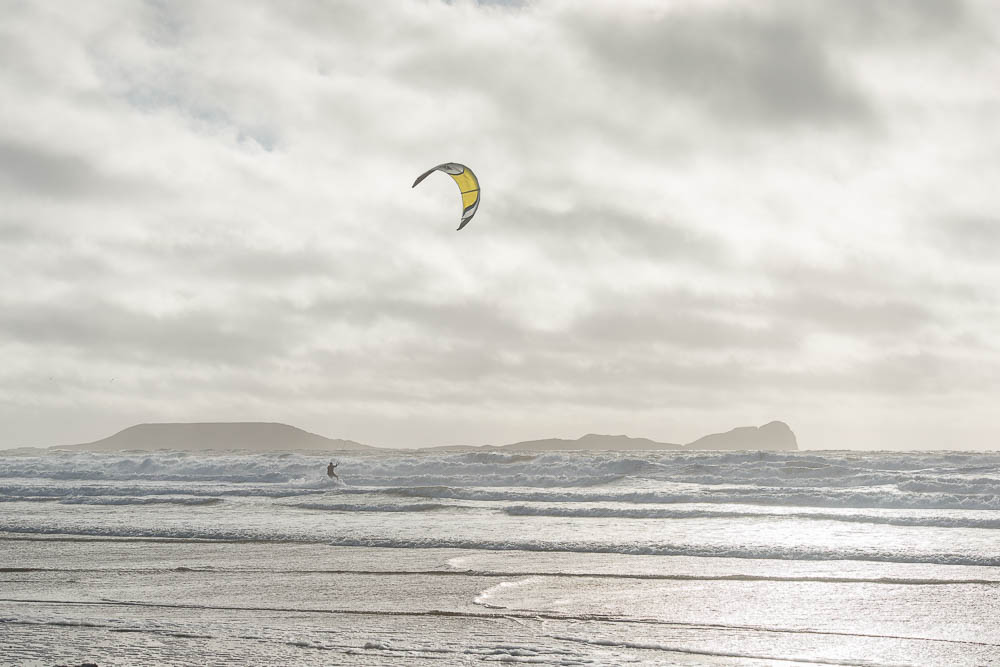 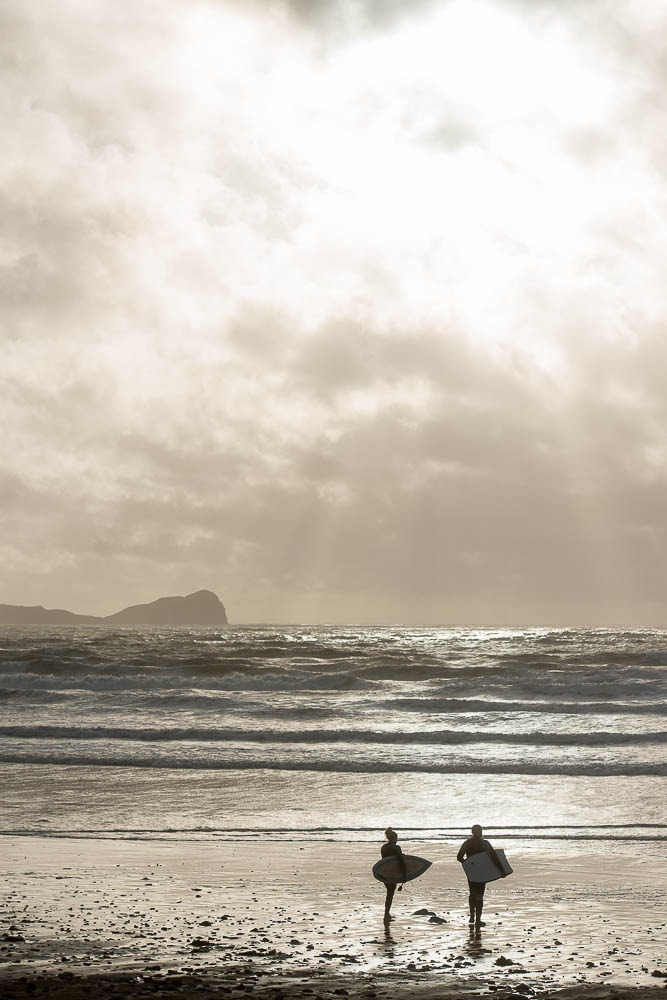 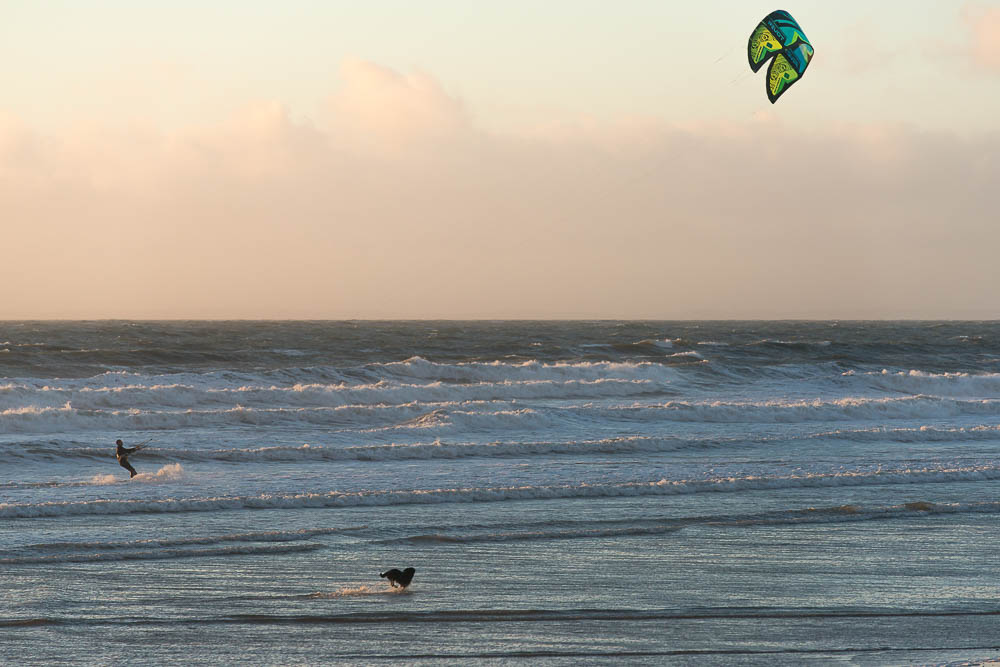 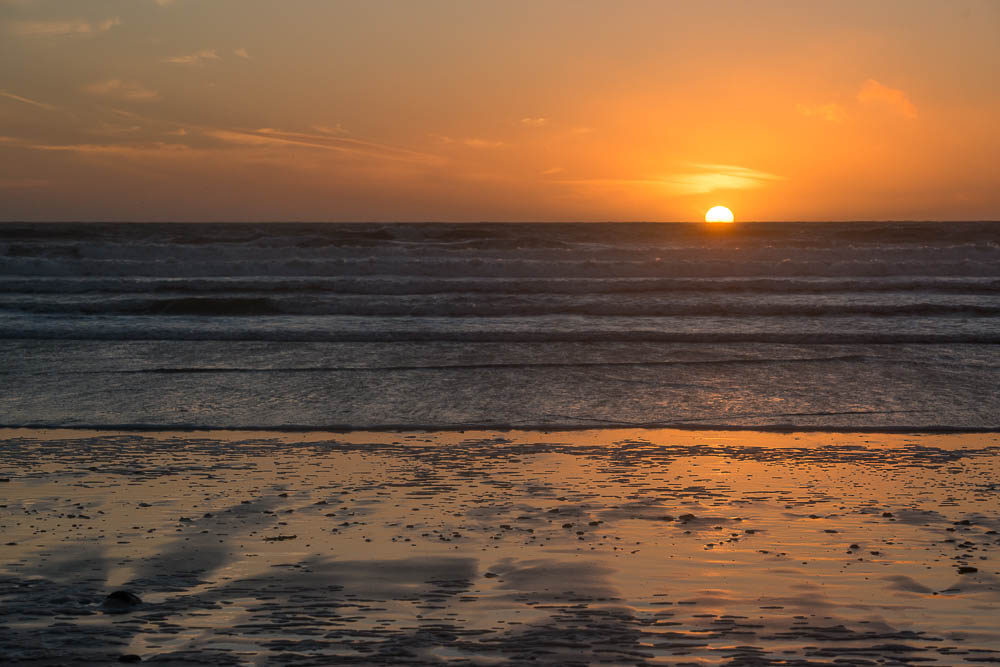 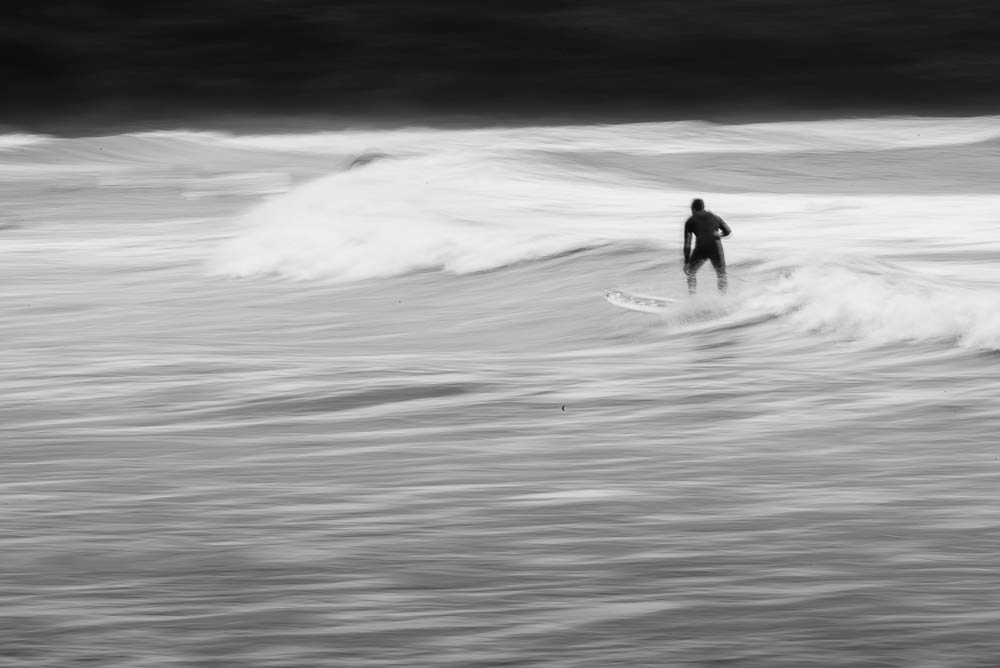 It has been really dark and grey recently, so sharp, detailed images are really hard to come by in natural lighting. There is virtually no natural colour as well, so I was thinking black and white images when I headed down to Langland Bay on a stormy day to see what the surfers were up to. Although there were some decent waves, the lighting didn’t allow any photos of impact. I decided to change tack and moved over to the side of the bay where the long boarders were gathered.

This allowed me a side on view of them and also reduced the number of surfers around in the water. This gave less distracting elements in the background. As the long boarders were not trying any fancy tricks and holding their position on the board in a fairly still manner, they looked better when I used a slower shutter speed to show motion blur in the water. There were lots of misses with this technique, but when it works, I really liked the results. 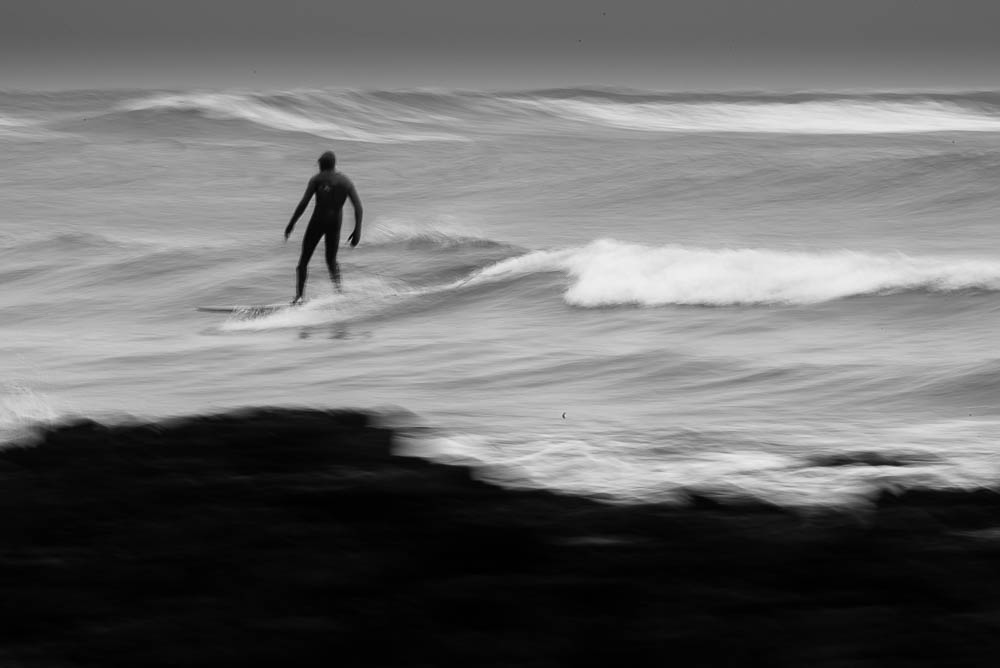 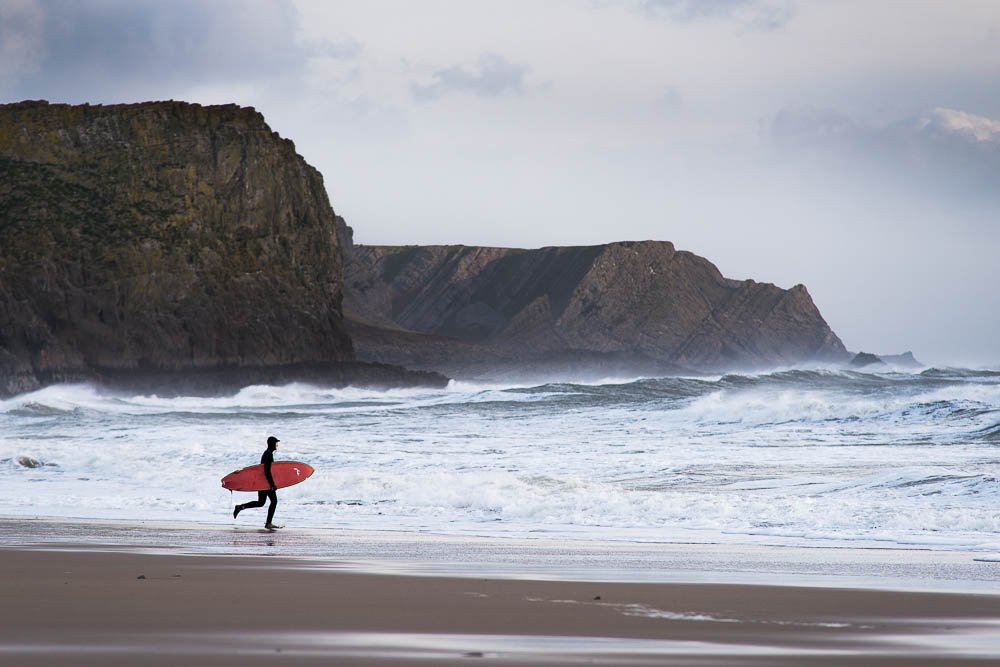 After a recent walk with friends that took us through Fall Bay, I decided to return to try and get some surfing shots, using the coastline as a backdrop. It was hard getting the surfer, waves and backdrop in the ideal composition. Most of my attempts of a surfer on a wave just didn’t seem to work as well as the image above. Red is always a great colour for catching the viewers eye, so when a surfer arrived with a red coloured board on one side, I couldn’t believe my luck. Of the few frames I managed to get, the one above appealed to me the most.

With the sun backlighting the spray of the waves as they approached the shore, it gave me the opportunity to isolate one wave that was forming out to sea by itself over a shelf of rock. Although it doesn’t look that large the wave was a good six to eight feet tall. Some thing to provide?a sense of scale in the image would be nice, but it was too dangerous for the surfers?to surf with the rock shelf as close to the surface as it is. 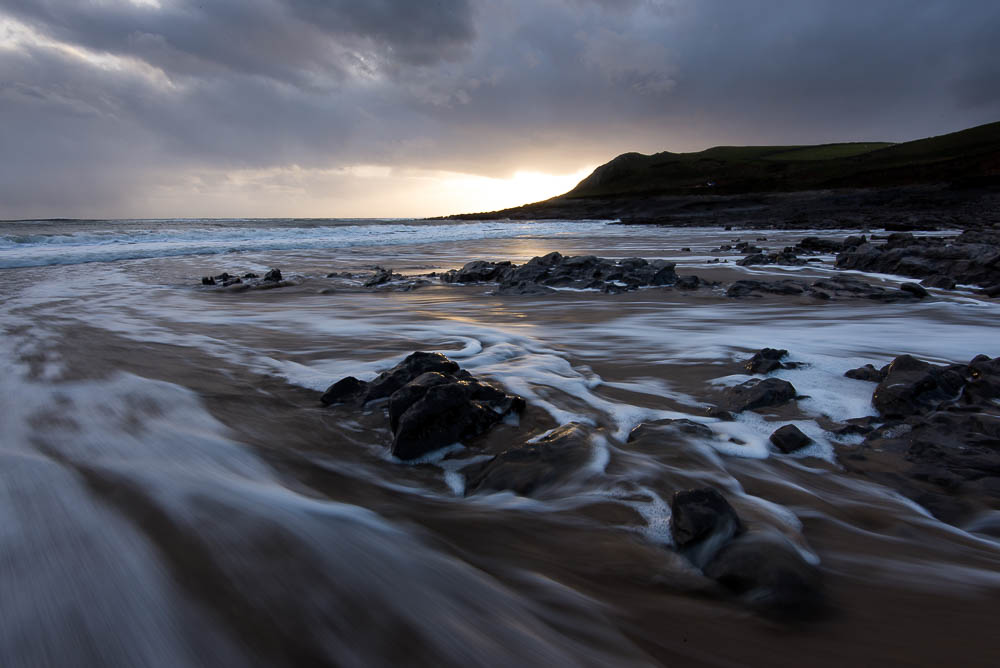 As the light began to fade, I attempted a few landscape images with the sun hiding behind the clouds and headland. The position of the white foam of the incoming tide proved important to the composition, so I took quite a few images to get the correct sense of motion and volume of white in the image. I still think of the images as a work in progress, so look out for more to come. 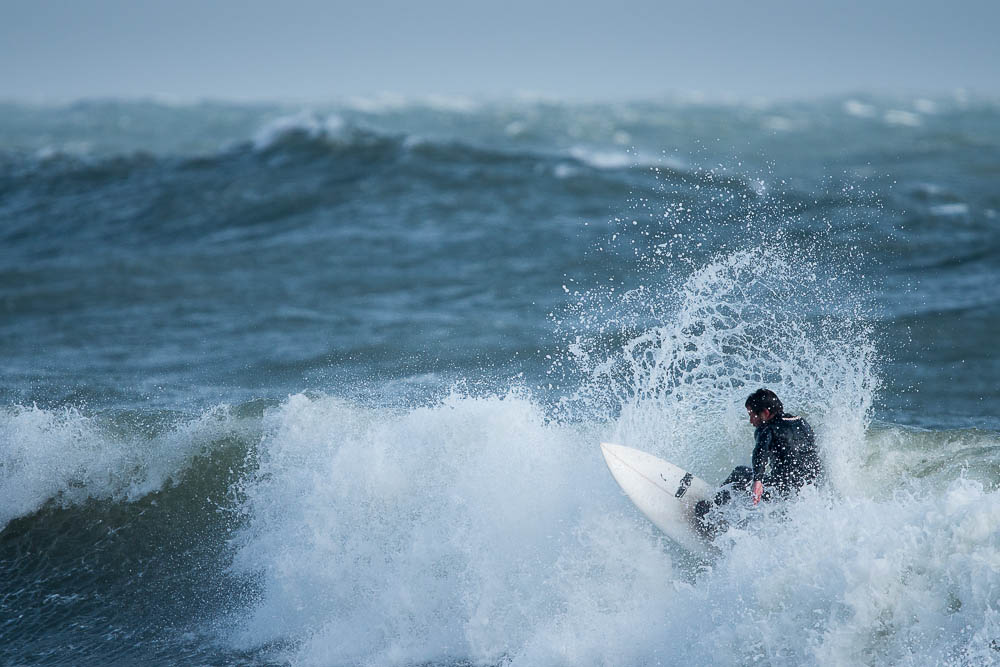 With strong winds from the south west forecast for the whole weekend and wave height predicted to be between 7 to 10 foot, it was a great opportunity to get some surf photography in. Later on in the year I will be meeting up with Chris Burkhard, category winner in the Red Bull Illumine photography contest and senior staff photographer for Surfer Magazine, so I’ll need some images to put in front of him for critique. 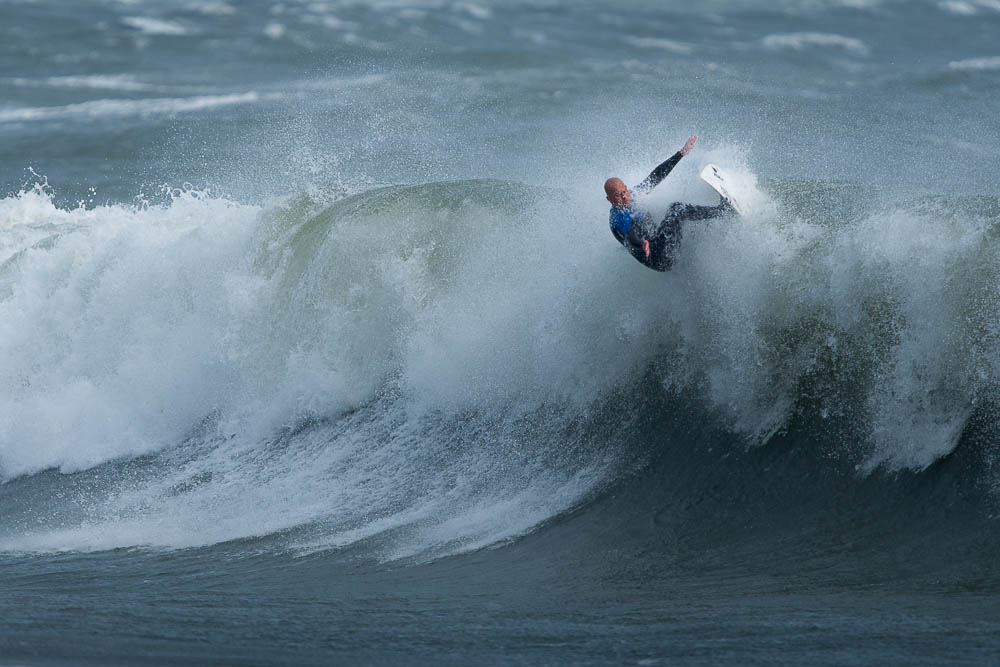 Surfing photography is always a numbers game, with the cameras motor drive set to a high frame rate so with a few high volume SD cards fitted in the camera, it was just an attempt to get the surfer positioned well in the frame. With the surfers a fair distance out in the bay I decided to use the Nikon D800. Admittedly it has a slow frame rate of 4fps, but when put into the DX crop mode the frame rate improves to 6 fps. The crop file is a good 24MB in size, so plenty of resolution is still available and gives the advantage of increasing the focal length by 1.5x. My focal length of 500mm now became 750mm. A higher frame rate would help, but since most of my day to day needs don’t need such a high rate, I don’t own a camera with one; I just hire it as and when it is needed.

So not a bad start to the exercise, but a few images in less flat lighting conditions would be nice. Overall, still a work in progress. 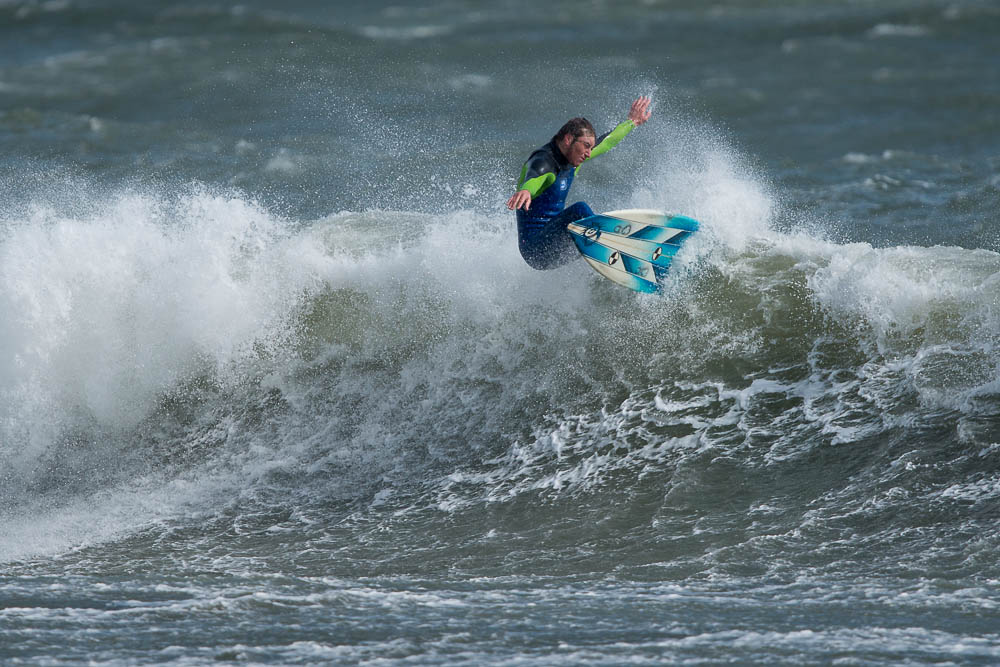